av For Velferdsstaten | aug 27, 2010 | Articles in English, The Welfare State 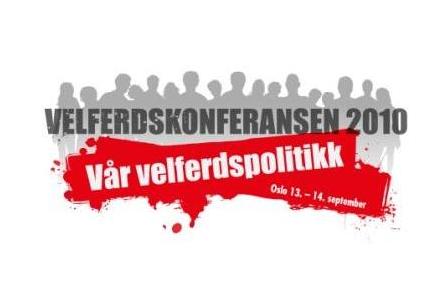 The Norwegian welfare state is a result of the long political
struggle in our society to promote common interest rather than
economic interests. The welfare state has contributed to the
evening out of inequalities and has promoted social benefits and
universal access to public services such as health care and
education A highly developed welfare state is the result of larger
power struggle in society.

Trough the last decades we have experienced that the forces who
work to weaken and undermine the great gains of the welfare state
has been strengthened and are stepping up their aggression. Massive
market deregulation is in the core of this development. Universal
access and social services has been undermined, deregulated and
privatized. The marked successively conquers larger and larger
parts of our society.

The people oriented notion of freedom, understood as
freedom from oppression, exploitation and want, freedom of speech
and the right to take part in the democratic development of
society, has largely been conquered by other interests and turned
into a struggle for the freedom of capital to move where it want,
when it want. This understanding freedom is limited to the freedom
to choose between different offers in a market, freedom not to
choose common solutions and not to contribute to the development of
universal access and quality for all. This is the freedom to make
our common goods into market goods.

The rule of distrust knocks welfare
down
One part of the offensive form the forces of
capital is the transfer of private sector principles of management
into the public sector, known as the management ideology New
Public Management (NPM). This is the rule of competition in
all aspects of society. NPM is grounded on a degrading view of the
human spirit, where peoples are driven exclusively by narrow
personal economic interests and where people only do their best if
they are submitted to competition and control. The result of this
view is a system of distrust, with increasing control form above,
rule by narrow economic objectives, marketbureaucracy, local wage
differences as a mean to control, attacks on the Working
Environment Act, social benefits below the poverty line and a
general brutalisation of work

This undermines cooperation and common, professionally grounded
development, weakens inclusion, equality and justice, witch has
been important hallmarks of the public sector. Thereby the
employees are prevented form giving customized offers and high
quality services to the citizens. It is not hard to understand how
both the work sphere and the society as a whole are being
brutalised under this sort of view of the human spirit, and that
the results are exclusion and higher social costs.

New challenges
At the same time we see new
challenges. Comprehensive restructuring in work, business and
population, together with new technology, demands new approaches,
changes and a further development of the welfare state.

We see how the Earth’s ability to carry our consumption
and our emissions is about to override all boundaries. The human
impact on environment and climate is a new risk to future
generations. The letting loose of capital, the deregulation of
finance and the inherent demand of capital to increasing returns,
is about to destroy the foundations of the productive economy,
mechanisms of control in society and the Earth’s ability to
recreate.

All these new challenges demand stronger democratic control, new
thinking, more creativity and a different use of the
societies’ resources. Today’s crisis does not only
create huge problems, they are also opening up new possibilities.
To take advantage of these possibilities we need to put cooperation
instead of competition and alliances instead of division. It is
crucial to build upon the learning from the earlier development of
the welfare state, such as universal services, redistribution of
wealth and power and democratic control of the market forces.

Our welfare politics
Under different
Norwegian governments we have experienced that the degrading view
of the human, the distrust in the intentions of citizens and
employees, more bureaucracy, control and centralization, has kept
on with only minor variations. The market forces have been too
strong and the social movements and the democratic forces have lost
influence.

Therefore we put up great goals for Welfare Conference 2010. We
are to develop our welfare politics. We will challenge the
market society’s degrading view of the human spirit. We will
look at different sectors and find new ways to meet the new
challenges. All this without loosing sight of the common grounds
witch are central for our alliances, the work we do together and
the strengthening of each other. We will stand together in the
struggle towards democratic management and control in place of the
market forces and their narrow efficiency goals and degrading view
of the human spirit. The rule of distrust inherent to New Public
Management is discouraging and creates resistance, while inclusion,
participation and influence foster dignity, pride and
responsibility.

We believe that humans are social and united beings who are
dependent upon of each other and who develops and grows trough
cooperation. Whenever social movements gain power, they organize
unitary societies. This view is the basis of our welfare
politics.

The elements of our welfare politics are:
– cooperation rather than competition
– trust rather than distrust
– a work sphere adapted to human needs, not the other way
around
– development based on the competence of the employees and the
users
– radical redistribution through tax, social benefits and
universal and public welfare
– market forces and private economic interests are to be kept
out of welfare
– governing objectives based on quality
– strengthening of the democratic control of the economy
trough structural reform
– A sparing rescue of enterprises already under the New Public
Management regime

We are inviting speakers from home and abroad. We are to learn
from others experiences and to make ground for cooperation between
sectors and across local, regional and national boarders. We are to
make ground for a mobilization for Our Welfare
politics.